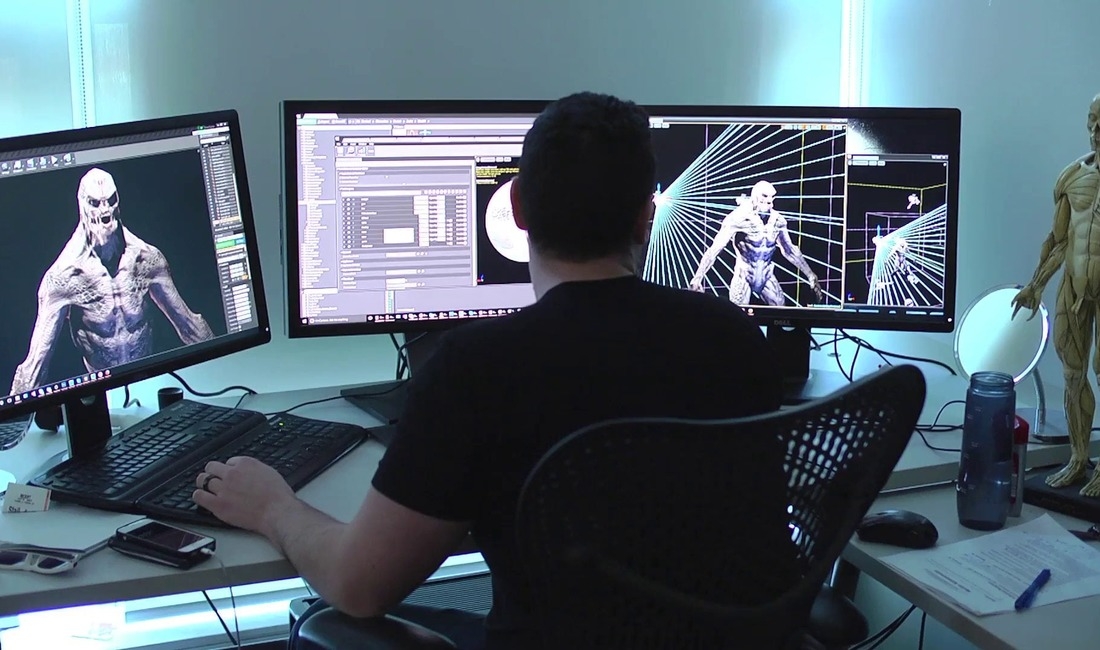 This review is a well-coordinated work of the editorial office, the creative director of robots, iron art directors and robodesigners. we decided to make the issue special (just like that) and invited the guys to share their experience in creating games.
2022-01-22, by ,

Robots like to disappear into video games from time to time. We not only enjoy them, but also scan for powerful UI/UX and exciting graphics. By iron tradition, we publish all the most interesting design finds, after which we collect a thematic digest based on them.

I want to share with you games of unearthly beauty with an amazing atmosphere and an interesting plot. And I'll start with Deus Ex: Mankind Divided.

This is a cyberpunk stealth action game on the theme of the near future (2029) with a non-linear plot and elegant level design (futuristic Prague is beautiful). And so that you understand how much the developers of Deus Ex bother with design, read a cool article about how they created costumes for the characters. It shows the role of the art director in working on games.

And I also advise you to watch a movie about the relaunch of the Deus Ex series in 2011 and an artbook. There, the developers tell how the idea of the artistic style of the game — cyber renaissance - arose, and how they embodied this idea in visual design and music (reference: 3d asset creation).

Watercolor platformer GRIS is a story about a girl who has experienced psychological trauma, after which she lost her voice. As the game progresses, the heroine experiences all stages of stress, and her dull and gray world acquires colors and fullness of sound.

Incredibly beautiful and musical game. It will take 2-3 hours to complete. Be sure to play if you want to experience catharsis and inspiration.

Divinity: Original Sin 2 is a classic RPG that can be played alone or four with friends ?

If you decide to play, then finish all your business, because you will be delayed for a long time by a great sense of humor, moral dilemmas, difficult destinies of characters, a well-thought-out world and amazing music.

Dishonored 2 is a steampunk stealth action game. In the world of Dishonored, humanity has made a technological breakthrough by learning how to extract energy from "blubber" - the fat of giant whales. Some of the most respected people are natural philosophers, inventors and scientists. And in this world, there is always an otherworldly "Abyss" and an "Alien" somewhere nearby, who, for the sake of entertainment, gives people supernatural abilities or drives them crazy.

The first part of the series unfolded in a classic setting for the genre — in the capital of an island Empire, reminiscent of Victorian London. But the second part is in sunny Karnak, inspired by the coastal cities of Italy and Spain. The game turned out to be incredibly atmospheric: looking at the picture, it seems that you can even smell fish in the port or old wooden furniture heated by the sun in an abandoned apartment.

Game locations - the Adermir Institute, the mechanical mansion, the house of Aramis Stilton, existing simultaneously in the past and present — are just a work of art. By the way, inside the houses you can see crazy and fascinating paintings by the artist Pjotr Jablonski.

Subnautica is an exciting survival game on a marine planet. Bizarre labyrinths of coral reefs, underwater caves and volcanoes, floating islands, fields and forests of algae, flocks of small colorful fish in shallow water and giant leviathans in mysterious depths!

You feel like the discoverer of a paradise, then a small grain of sand, powerless before the unimaginable power of the elements. Great sticking point for introverts. If you don't play video games, then just look at the concept art of the environment, technology, alien flora and fauna - they will not leave you indifferent.